This year’s news about hail storms told stories of how hailstones as big as grapefruit and hand fists, caused terrible damages on cars caught parked outdoors. Although the hail storms occurred in parts of the globe considered as hail spots or hail belts, the stones were massive and in sizes that were larger than expected. Actually, climate scientists had warned about forthcoming hail storms becoming more intense, but the destructions caused were totally unexpected.

News reports said the terrifying storm dropped large hailstones for about 10 to 15 minutes. The weather disturbance also caused injuries sustained from car collisions, as many drivers of moving vehicles found themselves suddenly navigating behind smashed windshields.

People were left stunned, posting photos and videos in social media sites, of broken windshields and dents on their cars. Some others recorded chilling videos of grapefruit-sized hail stones crashing through windshields and backshields while dropping like bombs on car roofs.

Historically, the largest hailstones recorded in the past were as big as tennis balls, having diameters of about six to seven centimetres. This year’s exceptionally large, grapefruit-sized hail stones measured 10 centimeters long.

Why and How Do Hail Storms Happen?

According to Canada’s CBC News, the hailstorm happened right after a tornado passed Alberta, a western province known as one of Canada’s Hail Alley.

Climate scientists explained that although hail has something to do with cold conditions, they occur during summertime when humidity is high. Humidity being that condition when much of the moisture is trapped in the atmosphere, most of which get caught in updrafts. The latter refers to strong currents of hot air that push condensed water vapor upwards; reaching high atmospheric areas that are cold enough to freeze the precipitations and form hailstones.

Now here’s the thing, the stronger the updrafts, the higher and colder the atmosphere in which water is delivered and frozen, the larger the size of the hail stone produced. Once the atmospheric area can no longer hold the hailstones, the frozen precipitations start falling at a rapid speed of 90 miles per hour. 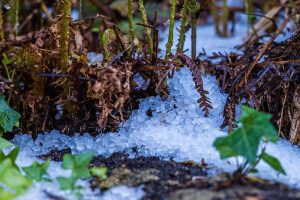 If the hailstones are small, they melt before they reach the Earth’s surface. This implies that the grapefruit-sized hail stones were even larger when they started travelling toward the Earth.

The Need to Give Vehicles Protection Against Hail Stones

If leaving one’s car parked on the street or outdoors cannot be avoided, it would be best to put some protection by placing a carcover over the vehicle. Climate scientists have predicted that the frequency and intensity of the hail storms that are about to happen will cause greater and more serious damages.

The resulting dents left by the recent hail storms are so unsightly, car owners expect the resale value of their vehicles to drop considerably. There’s also the extra costs of replacing shattered windshields and back glass. As it is, investing on a waterproof and durable car cover is a practical solution.

Today, there are online stores from where consumers can buy carcover. Those residing in geographical locations where hail storms normally happen must make sure they are buying the durable kind. Still, as climate changes have also caused unexpected weather to take place in unsuspecting areas, a versatile, all-around carcover is presumably the best choice, whichever place one is located.